The National Bank building is located at Kotzia Square and

remains unchanged since 1900. At the time of Otto, there were two similar buildings almost

built in the 1840s. On the left was the Domdandos house and to the right the hotel “England” belonged to the entrepreneur Francesco Feraldi.

In 1845, the founder of “National Bank” Georgios Stavros bought the Domdandos house, which now housed the first bank branch of liberated Greece. In 1900 the two

buildings of the square (hotel and home office of the bank) were consolidated in a single building still admire today. 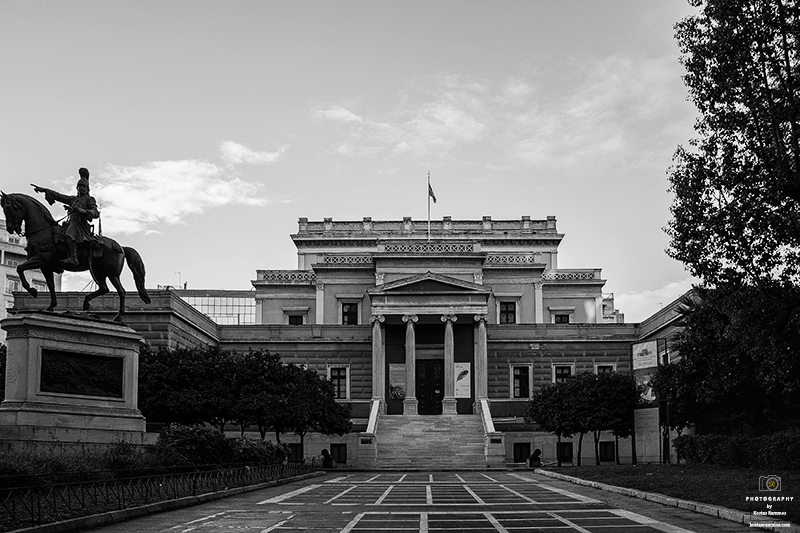 The Old Parliament House at Stadiou Street in Athens, housed the Greek Parliament between 1875 and 1935. It now houses the country’s National Historical Museum.

The site was occupied originally by the house of the Athenian magnate and politician, Alexandros Kontostavlos. After Athens became the capital of Greece in 1833, King Otto selected it as temporary residence, pending the construction of the Royal Palace (which houses Parliament currently). In 1835, a large dance and banquet hall was added to the house, and after the 1843 Revolution, which forced King Otto to grant a constitution, the National Assembly convened here. In October 1854, however, the house burned down in a fire. Construction of a new building then began in August 1858, with the foundation laid by Queen Amalia, on plans by French architect François Boulanger. Construction was halted the next year due to lack of funds, and not restarted until after Otto was deposed in 1863; the plans were then modified by the Greek architect Panagiotis Kalkos, and construction was complete by 1871. During the interim, Parliament had been housed on the back of the square in a brick building, hastily erected in 1863, which became colloquially known as “the Shanty” .

The Hellenic Parliament would remain in the building from 1875 until its move to its current location in the Old Palace in 1935. As such, it witnessed some of the most turbulent and important events in modern Greek history, including the assassination of Prime Minister Theodoros Deligiannis on the Parliament steps on 13 June 1905, and the declaration of the Republic on 25 March 1924. After the parliament was moved, the building housed the Ministry of Justice. In 1961 the building underwent extensive restoration and became the seat of the National History Museum, administered by the Historical and Ethnological Society of Greece.

Georgios Vroutos was a renowned Greek sculptor of the 19th century. Was born in Athens in 1843, into a family originating from Crete. He studied sculpture at the School of Fine Arts from 1859 to 1864 under Georgios Phitalis and also took courses in marble carving at the workshop of the famous professor and sculptor Ioannis Kossos. In 1866, he traveled to Rome with a scholarship from Queen Olga, where he stayed for three years, studying under the supervision of Canova, Adamo, Tantolini and Filippo Niakarini. During his time in Italy, he worked on behalf of an Italian banker. When he returned to Greece in 1873, he opened his own sculpture workshop in the district of Plaka (or he took over the Kossos workshop which in the meantime had died) and in 1883 he was appointed professor of sculpture at the School of Fine Arts, as successor to Leonidas Drossis who had just died. Vroutos retained this position till his own death. In 1888 he was proclaimed a member of the Academy of Fine Arts in Paris. He was also a founding member of the Historical and Ethnological Society of Greece. He died in Athens, on January 10, 1909. 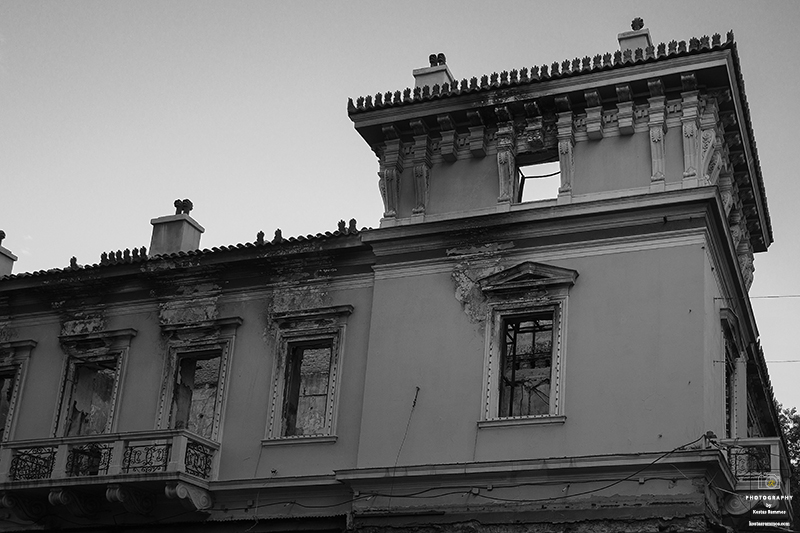 Located in the centre of Athens, close to the old Parliament building. This elegant Neo-Classical style building was built between 1870 – 1881. It was designed by architect Ernst Ziller on behalf of  banker Stamatios Dekozi Vouros.

In 1900 housed there already pharmacy S. Valti (already mentioned in 1891), the barber shop of L. Mousiou and shop ‘China goods’ of P. Georgiadis, while 1914 was hosted for a little time the newly established Ministry of Greek National Economy.

It was converted into a theatre in 1904, and became a cinema in 1916. Seating was provided in orchestra and balcony levels.

During the Nazi occupation it was prompted by the Germans to screen films for the entertainment of German troops. Atticon is renamed Soldaten Kino Victoria, Apollo at Kino Apollo, while other cinemas are required to list the titles of the films in Greek, German and Italian.

The Attikon Cinema was one of the host cinemas for the annual Athens Film Festival and was operated by Cinemax Class. The building was petrol bombed by rioters on 12th February 2012, the fire caused considerable damage. “Tinker Tailor Soldier Spy” was the last film shown. 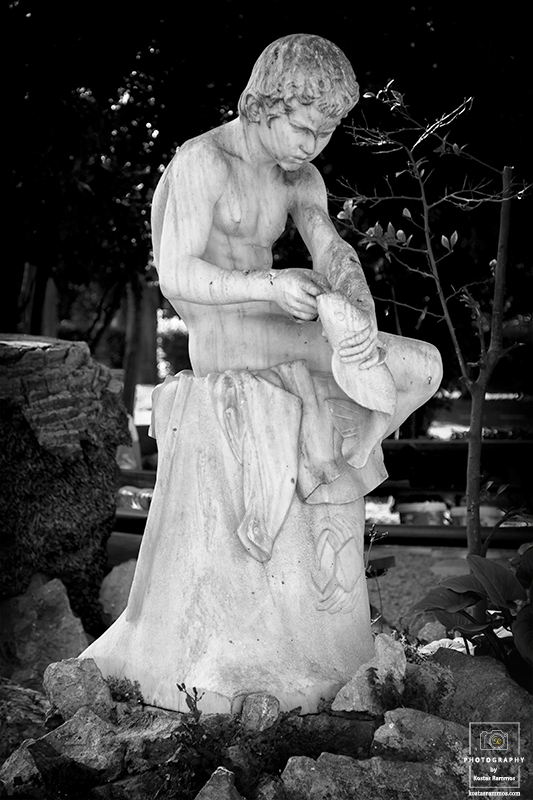 Dimitrios Filippotis (Tinos, 1839 – Athens, 28 November 1919) was a sculptor of modern Greece. Born in Tinos , he was the son of Zacharias Philippos, a renowned marble sculptor and eminent architect, who had also built several temples, including the Monastery of St. Paul on Mount Athos.

It is made of marble. It depicts a young boy sitting on a bare rock trying to pull the hook from the fish he has just caught. The boy’s dimensions are natural while on the rock there is a relief representing a crab.

The sculpture was built in 1875 and placed in 1929. Antonopoulou mentions a series of copies (in Tatoi, in the Municipal Gallery of the Municipality of Athens, in a private collection).